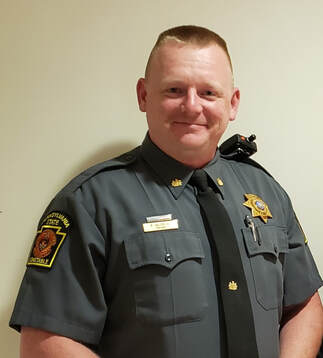 Richard Salter began his law enforcement career in September 2008 after being appointed to fill a vacancy in the Office of Constable for Eldred Township in Monroe County, PA. Constable Salter was then elected to maintain his position as Eldred Township’s Constable in 2009. After completing a full six year term of office, he was re-elected to serve his second full term of office in 2015, in which he remains serving honorably still today. In 2013, Constable Salter appointed his wife, Virginia Salter to serve as a Deputy Constable for his office. Since their election/appointments, they both have continued to serve the Pennsylvania Minor Judiciary.

Constable Salter is a graduate of Northampton Community College, with a degree in Criminal Justice. Following earning his Associates Degree, he went on to pursue a Bachelor’s degree in Criminal Justice at Penn State University.
Prior to pursuing his law enforcement career, Constable Salter earned licensure as a Certified Emergency Medical Technician and worked with various EMS agencies in both volunteer and paid capacities. He moved on from the EMS Service and volunteered to serve his country as an Infantryman in the U.S. Army for four years. After his Honorable discharge from Active Duty, Constable Salter returned to Pennsylvania where he re-entered public service as an EMT & Firefighter. Today, he continues to serve his community in the fire service where he holds the position of Captain and Board of Director with the Kunkletown Volunteer Fire Company.

Throughout his law enforcement career, Constable Salter has made great strides to promote and advance the Pennsylvania Constabulary. After earning the trust of the Monroe County District Attorney’s Office, he was instrumental in the creation of the Monroe County Constable’s Task Force & Accreditation Program. This program, the first of its kind in Pennsylvania, established enhanced standards, policies, procedures, and additional training requirements for Constables; all while creating extra work opportunities for Constables participating in the program. For his outstanding service through a continuous effort to bring professionalism to the Office of Constable, in 2018 the Commonwealth Constable’s Association presented Constable Salter with its highest award, the John L. Burns Service Award. He was again recognized in 2019, when he was presented with an award for his Outstanding Volunteer Service to the community as a Constable through his continued involvement with the West End Food Pantry. In addition to these great achievements, Constable Salter also served on a Workgroup Committee established by the Pennsylvania Commission on Crime & Delinquency which was formed as a cooperative effort between the PCCD and Constabulary to identify ways to improve and address the various issues surrounding the future of the Constables Education Training Program.

In addition to his PCCD Training & Certification, Constable Salter has received specialized training in several facets of modern law enforcement, including Narcotics Investigations, Police Intelligence, and Criminal Street Gangs through St. Petersburg College; Active Shooter & Tactical Medicine training through the Federal Law Enforcement Training Center (FLETC); multiple Traffic Control training courses through the Pennsylvania Fire Academy, Federal Highway Administration, and the Pennsylvania Department of Transportation. In addition, after securing a Medical Director, and cooperation with a local EMS agency, and the Eastern Pennsylvania EMS Council, he is also responsible for the creation/implementation of a Nasal Naloxone Training & Administration Program for members of the Monroe County Constable’s Association, in which Constable’s receive training and are equipped with nasal naloxone while they preform their duties as Law Enforcement officers. 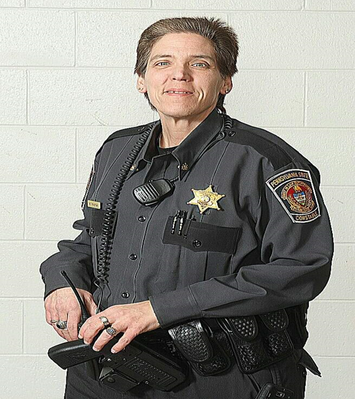 I would like to introduce myself.  My name is Marcia Rossman.  I live in rural Clarion County with my Niece, 2 great-nephew age 8 and 6 and my 3 Greatdanes,   Smokin “Ash”, Black Jack, and Velten

I have been State Constable since 2012, having the privilege of doing all aspects of the  job.  Minimal Prisoner transports however due to the County Sheriff Department having this contract.

​As the saying goes, I am a Jack of all trades, Master of none.  Which leads me into some of the certifications and education I have.
Act 235 Certified
Paramedic – 37 years   Prehospital Provider of the Year (2017 – EMMCO West)
CPR/ First Aid Instructor, ACLS, PALS and ITLS Instructor
Hyperbaric Oxygen Therapy Technician – National Certification
Critical Incident Management Certified:  Peer, one on one, debriefing and defusing
Safe Crisis Management: Trained and past instructor

My Education consists of a PhD in HealthCare Administration with a minor in Social and Behavioral Sciences.  This however does not mean anything besides,  I paid a lot of money to prove to myself that I could do something that someone once told me I couldn’t.

My philosophy is: take one day at a time and be the best you can be, but treat others as you want to be treated.
Contact Director Rossman

Bill has also served as a private police officer since 2015 up until recently when he left private policing to manage his legal support services firm full-time. He is currently the Owner and CEO of Menke Process Servers, LLC. Bill has also served a six-year term in the United States Army in the Signal Corps as a Satellite and Network Analyst attaining the rank of Staff Sergeant (SSG) before separation.

Many would describe Bill as a playfully energetic and charismatic individual with slight undertones of sarcasm and wit that only gets better with caffeine. Many of his friends would describe him as a man of integrity and character who would stand up for what is right regardless of negative personal outcomes.

In February 2020, Bill graciously accepted the position of Regional Director of Region 4 of the Commonwealth Constable's Association and plans to make an impact on not only the office of the Pennsylvania State Constable, but also on the CCA as a whole.
Contact Director Menke